Amritsar’s Khalsa College Clash 24-Years-Old Lovepreet Singh Died Punjab has been running on trend nowadays whether due to Chief Minister of Punjab Bhagwant Mann or shooting. Two days ago Sidhu Moosewala was killed by the gangsters in his village Mansa and yesterday similar shooting was reported in the Amritsar Khalsa College, and Lovepreet Singh who is a student of this college lost his life in the particular shooting. Once this news is published by the media on various platforms people are searching it on different pages as well as social networking sites. 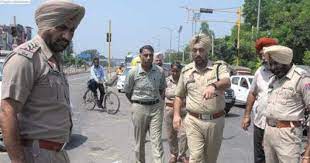 The citizen of Punjab has been facing the cruel side of Law and Order, yesterday morning a bus was looted at the gunpoint publicly later on the same day shooting has been reported in the Khalsa college of Punjab University. One student of that college who is well known as Lovepreet Singh died and one was suffering in the hospital between life and death. Amritsar’s Khalsa College Clash 24-Years-Old Lovepreet Singh Died

According to the officials who are investigating this case two group was fighting outside of the college and suddenly one of them who were fighting there started shooting in the shooting, many rounds were fired and Lovepreet Singh was shot in this shooting but Police has been confirmed that it was a gang war. The investigating team is also searching for more evidence to clarify this like water.

After this shooting, the political controversy started and there are many political leaders coming to the media and targetting the AAP. They also target the Chief Minister of Delhi and the Founder of AAP Arvind Kejriwal. One of the leaders of the Congress Party tweeted that The Law and Order of Punjab have been plundered. Still, the Chief Minister is setting Moun and one of the leaders of the opposition tweeted and said that the Cheif Minister of Punjab would ask Arvind Kejriwal to take action on this shooting.

After this statement, Raghav Chaddha also thrashed into controversy because he said on his Social Media that the Police have to investigate those tweets who are making Arvind Kejriwal’s image down. The opposition leader is saying that Raghav wants to take action against the users of Twitter but for this case and Law and Order, he does not want to pay attention.

So heartbreaking to watch this. Please stop 🙏 24 year old Lovepreet Singh of Batala died in incident of firing between two groups outside Khalsa College Amritsar on Wednesday. via: kamaldeep singh brar #SikhGenocideContinues pic.twitter.com/apYuxJWncb

People are circulating this case on various platforms so that the government of Punjab took as pressure and filed action as soon as possible and also rectify the Law and Order of Punjab. May his soul rest in peace.