Akshay Kumar is a brand itself and did every genre of movies. He started from the action movies and called as KHILADI. He excelled comedy field and gave us many hilarious movies like Housefull series and many more. Now he is emerging with many patriotic movies and doing movies which gives a good social message. AIRLIFT, RUSTOM, JOLLY LLB 2, every movie stunned us. He did wonders with his last movie Toilet Ek Prem Katha. Padman is the first movie of Akshay Kumar to be released in 2018. This is a Hindi biography comedy-drama movie written and directed by R.Balki. This movie will be released on 09 February 2018. 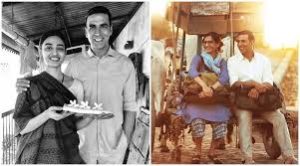 Akshay is playing Lakhimikant Chauhan. This movie is inspired by Arunachalam murugantham in real life. He built such a machine, which produces sanitary napkins cheaply. That is why he is known as “Pad man”. Radhika Apte is playing the role of Gayatri, wife of Akshay Kumar. Sonam Kapoor is also seen in the movie as supporting actor and she is a medical student and seen helping Akshay Kumar. Amitabh Bachchan is playing a special role in this movie. Akshay first observes her wife to be suffering from the menstrual cycle and feels bad that he cannot do anything for her. Then her wife makes him familiar with the problem and he tries to take out a solution. His main motive which is highlighted is showing respect to this problem and empowering women in every perspective.
As always, Akshay giving a Social message through this movie. This movie will be shown on 2,800 screens.
Talking about the audience they liked the trailer and they are very excited to see the movie. Soon songs of the movie will be released and it is hoped that songs will become popular too.  The movie is estimated to do the business of 200 crores.